OK, so I'm so tired of contractors.  Especially contractors that suck.  Mostly these are the contractors that are hired by someone else.  We bought a range from Home Depot.  We paid Home Depot to deliver and install the range.  The installer arrives (contractor).  They say they can not install the range because the gas line we paid to have installed according to Samsung's installation instructions is not correct. The contractor tells me that he has been installing ranges for seven years and he has never seen a gas pipe like the one we had installed.

I want to stress that.  SEVEN YEARS and he has never seen a gas pipe like we have.

He said his install kit has nothing to connect to it.

I argue with him on the phone, tell him he is wrong.

I get home and what do I find?

The install kit they left here has everything needed to connect to the gas line we had installed, EXCEPT for the thread sealer.

I pick up the stub out pipe that the "installer" unscrewed from the wall and thread it into the adaptor from the kit they left.  I say "Are you fucking kidding me?"

The "installer" had done the same thing and had said "I can't make the seal work, these kits won't seal that.

The back of the install kit lists thread sealer for NPT to the flexible pipe.  Like I fucking told the guy over the phone, and he said in 7 years he had never seen.

So I go to Home Depot and get some natural gas safe thread sealant.  I install the gas hose and now here we go... 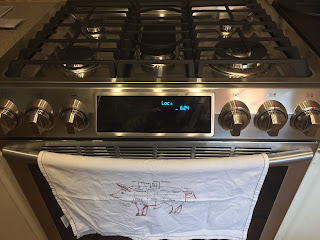 I do not know why companies do not care about stuff like this any more.  I know I will never buy an appliance from Home Depot any more, and I will tell everyone I know not to either.  It's like that Sears commercial "Can anyone help us?"  I know when I call Home Depot on Monday to get a refund on the "install" I will probably get it no question, but will that make them change their contractor?  No probably not.  Hell, the "installer" handed my fiance the tip over protector and said "you need to have this installed."

Douchebag is lucky I wasn't home for the delivery/"install"

The stove itself is badass, and I see cooking many excellent meals.
Posted by ChefJayPeek at 8:05 PM